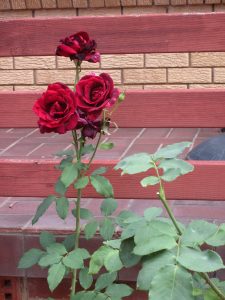 I wish I could write more about grieving, but as others have found, by the time you are conscious of having moved through a stage, another has come upon you – or memories you thought had passed, re-invent themselves, over and over again.

Although the process is essentially a solitary one, Covid made it even more so. My overseas-based son was finally able to visit in December 2021. After two years when travel was impossible, it was wonderful having him here, a pathway to healing. We did not talk much about his Dad. There seemed no need to. I hope he is grieving in a way that honours who his Dad was, while also enabling him to come to terms with the pain.

As for me, where have I reached, how far have I come? Reading Joan Didion’s The year of magical thinking has made me realise how differently each person grieves the loss of their spouse. Joan seems to have had a happy marriage that ended unexpectedly and abruptly when her husband died of a heart attack. My marriage, at least the second half of it, was far from happy, and mourning someone who has become lost to you is a hard task.

But the past has such power! Its remembrance hurts, but in ways that change as those of us who are left behind, figure out how to live our lives. Our closest relationships are, perhaps, those where the least is said. By the time death has shown us the importance of those missed moments, it is too late to do anything about them. It turns out that being dead is no trouble at all. It is dying that is tough, and as for grieving – ah, that is a past caught in a present that will not let you go unless you can, finally, forgive both the one who has gone, and yourself.

The regret I have now, is that I did not understand enough, and preoccupied with simply staying the course, I was unable to break down the walls of our mutual incomprehension. If I have any advice to give, it is this – when those stray comments come from others, the remarks you don’t really understand, don’t let them go, even if you want to. Ask questions, even if it is uncomfortable. Always ask questions.

We are now entering our third year post-Covid. Life is returning to normal, at least if you count the number of cars on the roads as an indicator of normality. Perhaps, though, more people are walking than before. I hope they are enjoying the streets close to home. Ironically, the pandemic turned out to be less painful for those of us living in suburbia than for those in apartments. Being locked down or doing home iso in a house, especially one with a garden, had its compensations. Indeed, for those who never socialised much anyway, being locked down did not change very much at all.

The pandemic taught us quite a lot, though. It showed us how much we need to maintain contact with others and how important, for many of us, local businesses are in providing a focus for each day’s existence. For me, my local coffee shop and newsagent were indispensable. Thank you to the owners and workers who kept them going despite all the difficulties.

But the pandemic also showed us, at least those of us in a mood to pay attention, that if we develop our inner resources, perhaps we don’t need quite as much mixing with others as we thought we did. Neither do we need to travel vast distances in order to be happy. If you have access to open space and room to move, it is perfectly possible to be content in and around where you live.

Of course, that’s if you had the freedom to work from home. If you were doing a truly important job, you didn’t have that luxury. The pandemic showed us how much we depend upon people who do physical things, who move stuff around, who look after sick people, who work the checkouts. Then there are those in the public bureaucracies, so often maligned, who have had to organise vaccine rollouts, devise online school lessons, decide upon public health notices. Many of them have been – and remain – exhausted. It is sad to think of those parts of the old economy – cafes, restaurants, and theatres in particular – that have closed down, never to return in their original form.

What about the ‘normal’ to which we are, breathlessly, returning? We live in a country which takes only a few things seriously – property, sport and mining, more or less in that order. These preoccupations are significant in their way, but too much of a good thing tends to keep us in a perpetual state of political and spiritual under-development.

Surely there is some law that says a boom cannot keep going forever? If so, the housing bust, long threatened or promised, depending upon your point of view, is well over-due. Or perhaps construction is somehow exempt: having abandoned any attempt at making things, it is one of the few hands-on industries we have. The streets teem with tradies, zooming around in vans and four-wheel drives and utes. They are the new aristocracy. We may find it difficult to get hold of the stuff that goes inside the new houses, seeing that everything comes from China, and the supply chains remain constricted. But the steel and the concrete and the timber framing seem to be readily available.

As relatively few people see virtue in small houses, large ugly ones proliferate. Most of the people in the very large houses drive very large SUVs. Why are the houses and the SUVs bigger than they used to be, when we are supposedly reducing energy use? The blocks of land on which the large houses sit are tiny. The three-ring circus of population growth, economic growth and environmental destruction seems unstoppable. So much of our pretty coastal and near-coastal pasture-land, dotted here and there with bushland, and the gardens that were once the delight of tree-lined streets in suburbs closer in, have disappeared under a tide of concrete and gravel.

Meanwhile, in the old-style suburb where I live, it has been a strange summer, much wetter than usual. The garden has grown in ways I could scarcely have imagined in the long years of drought. I watered dutifully then, of course, watching for signs of heat stress, using the tank water sparingly, bucket by bucket. But the rain is different. It refreshes roots deep down, and everything in the garden, and in the world beyond the garden, rejoices. It is a reminder of the power and sweetness of the natural world, which in our arrogance we believe we can both exploit and preserve at the same time.

The sounds of summer are ebbing away. The neighbourhood motor mowers, hedge-trimmers, whipper-snippers, chain saws and loppers are back in the shed. Because of Covid, there was not much entertaining, though one party generated a racket so insistent I felt compelled to find the source of it. I had to keep going a very long way down the street before I succeeded. As I approached the house in question, things started to look a bit intimidating. Both sides of the driveway were lined with empties, although I must say they were very neatly arranged, so that the cars could get in and out. I noted there was some kind of thump-generating machine located in a gazebo nearby. A very nice young man approached. (I can write that sort of thing now that most people I meet are younger than I am). ‘Would you mind turning the music down a bit?’ I asked.

‘I don’t live here myself’, he announced, a little too quickly I thought. ‘Do you live nearby?’ he added. I waved my hand airily – ‘a few doors up’ I said. ‘I will tell the owners’, said the nice young man.

I believed him implicitly of course. But as I looked a bit beyond him, a most extraordinary scene became visible. I am sure Fellini, had he thought of it, would have incorporated it into one of his movies. There, in the further recesses of the backyard was a rather large above-ground swimming pool, the sort normally reserved for kids. Within the pool, were three or four adult persons, whirling around at an amazing speed, just as we used to do when we were kids. Among the whirlers, I noted a bloke wearing a straw trilby, expertly doing things with his phone while holding it above the roiling waters. Who says we Aussies are not a sophisticated bunch?

What on earth has happened to the Poms? I remember the days when they would send the Sydney Cricket Ground into waves of slow hand-slapping, such was the dourness of their play. But in those far-off summers, when they batted, they did stay in. Their wickets had to be prised out of them.

The tourists of 2021-22 seemed to lack the basic guile one has come to expect. The English, my Dad explained to me, would always choose the best tactician, rather than the best player, to captain the side. By contrast, Australians would choose the best player. Now the English seem to have adopted the Australian idea, but without giving much thought as to how the captain might be trained or supported. Poor Joe Root seemed completely at sea.

When I get depressed about our failure, as Australians, to understand anything much about the land we live in, I make myself recall the huge feats of organisation that went into keeping various kinds of sport going over the Covid years. The country that kicked the unvaccinated Djokovic out, having given him a visa that somehow needed to be cancelled twice, must have something going for it.

And yes, there was something, or rather someone, else – the lass from Ipswich, Ash Barty, who somehow, quietly, relentlessly, purposefully, from an almost impossible position in the second set of the Australian Open final, caused her opponent to falter, then to lose game after game and, finally, the match. Remarkably, Barty has since retired. Even more remarkably, she seems to have been, and to still be, a genuinely nice person. Good on you, mate.